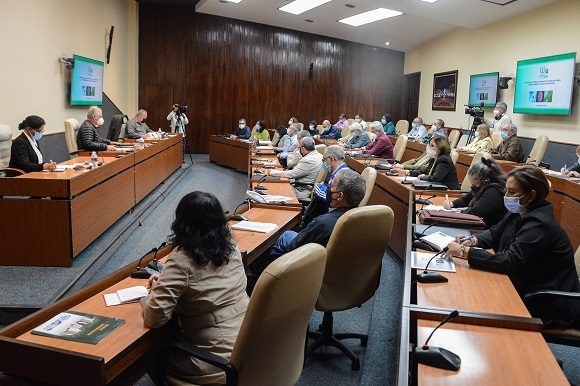 Meeting between the country’s highest authorities and experts who lead science and technological innovation activities in the fight against the pandemic. Photo: Revolution Studios

In Cuba, 1,874,565 children between the ages of two and 18 have their complete vaccination schedule against COVID-19, which has made it possible for no deaths, no serious or critical cases at those ages to be reported in the country, after the campaign deployed nationwide, the first of its kind in the world to combat this disease.

The First Secretary of the Central Committee of the Party and President of the Republic, Miguel Díaz-Canel Bermúdez, and the Prime Minister, Manuel Marrero Cruz, were informed of the evidence of the impact of immunization with Soberana on the pediatric population during the meeting that all On Tuesdays, they hold discussions with experts and scientists from the Ministry of Public Health who lead science and technological innovation activities in the fight against the pandemic.

Dr. María Eugenia Toledo Romaní, a leading researcher at Soberana 02, highlighted the decision made by the country — very early — to vaccinate its children and adolescents, which allowed us to “get ahead” of the wave of the Ómicron variant. So, she said, today we are having far fewer pediatric cases of COVID-19, compared to other countries in the world.

The doctor from the Pedro Kourí Institute of Tropical Medicine reported that more than five million doses of Soberana have been administered in Cuba and coverage in children between two and 18 years of age is 96.6%.

An important element, she added, has been the safety with which everything was conducted: the adverse events associated with this vaccination campaign were less than 0.01%. The most serious had to do with local events, there were no systemic events in the vaccinated children. In Cuba, she said, there are no reports of myocarditis or pericarditis due to our vaccines.

Toledo Romaní spoke of the estimates made by the Soberana researchers on how the risk changes in a child who is vaccinated and in another who does not. A child who does not receive their doses, she explained, “has 18, 2 times more risk of getting sick, but also has a much higher risk of suffering from severe forms of the disease.”

In her update, the researcher also reported on the 132,000 children convalescing from COVID-19 who have received their dose of Soberana Plus. According to her, the studies showed that the antibody titers of convalescent children immunized only with Soberana Plus and those who received all three doses are similar.

She drew attention to the fact that “the impact of vaccination can not only be seen in health, in the cases reported or in the severe forms prevented.” We also have to dwell on the social and economic impact that gave Cuban children the opportunity to return to their schools. The vaccination campaign with Soberana, considered the researcher, “was a party: the party for going back to school.”

The fact that Cuba had the political will not to start the course until it had high coverage of vaccinated children, is something that today also marks the joy of the little ones, he said.

Dr. Raúl Guinovart Díaz, dean of the Faculty of Mathematics and Computing of the University of Havana. Photo: Revolution Studios

Dr. Raúl Guinovart Díaz, dean of the Faculty of Mathematics and Computing of the University of Havana, returned to the Palace of the Revolution this Tuesday with his forecasts on the course of the COVID-19 epidemic in Cuba, which, he said, they are positive.

Based on the graphs made by leading mathematicians and epidemiologists, he explained that the forecasts for the provinces of Artemisa, Matanzas and Sancti Spíritus show a slow-growth trend. On the other hand, for the rest of the territories, the incidence of cases is expected to decrease in the coming days.

Guinovart stated that the “decoupling” between the number of deaths and confirmed cases must be maintained, which has been characteristic of this wave with the Omicron variant (more cases, fewer deaths); “and trends towards a decrease in confirmed, active and deceased cases are forecast. For the first two, the descent is slower”.

According to one of the models presented, it is expected that in the short term Cuba will maintain the downward trend in confirmed cases and deaths: confirmed cases could be close to 100 cases per day by the beginning of March and deaths will be more sporadic, being on average below one.

Despite this good news, the researcher warned that health measures must continue and care for the most vulnerable must be guaranteed, continue to deepen the work of primary care, home admission and the vaccine reinforcement campaign.

In this meeting, a special look was taken towards the most vulnerable people. President Díaz-Canel insisted on the responsibility of families and primary health care in protecting the elderly, since the majority of those who are dying in Cuba from COVID-19 are over 70 years old.

On this sensitive issue, Dr. Ricardo Pereda González, coordinator of clinical experts on COVID-19, specified that of the 84 people who had died until the end of January, 71 were over 60 years old; 33 were between 80 and 89.

In addition, he said, on average in these cases, eight days elapsed between the onset of symptoms and admission to the hospital, which significantly reduces the effectiveness of the treatments.

This need to stay alert in the face of the disease was later shared by the Prime Minister, Manuel Marrero Cruz, during the meeting of the Government’s Temporary Working Group to confront the pandemic, which every Tuesday follows that of the experts in the Palace of the Revolution.

After exchanging by videoconference with each of the territories and confirming the downward trend in cases in most of them for this Wednesday, Marrero Cruz insisted: “we have to reiterate once again that we cannot lower our guard, maintain the discipline, compliance with the measures that are established, improve household income so that we can really continue this path to decline, and reinforce economic and social activities to continue the development and economic sustainability of the country.” 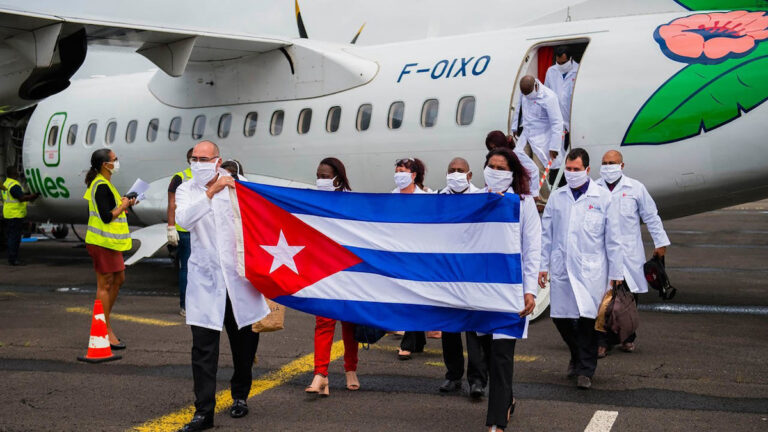 by Sam P.K. Collins Throughout the pandemic, a collective of grassroots organizers and industry leaders have coalesced around a mission to compel the U.S. government’s collaboration with Cuba’s Henry Reeve International Medical Brigade in the fight against COVID-19. As the omicron variant makes waves across the country, a collective of U.S. mayors have geared up… 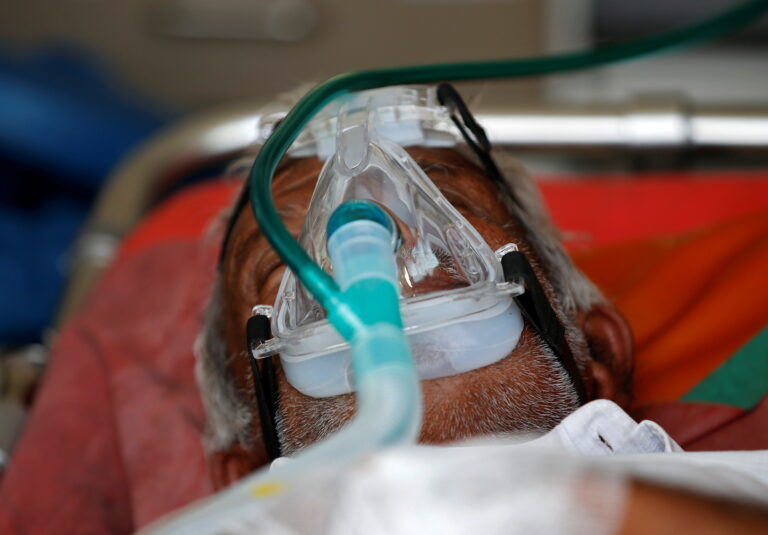 Carlos Lazo was the featured speaker. Lazo is a Cuban American, organizer of Puentes de Amor (Bridges of Love), and leader of the international caravan movement demanding an end to the U.S. blockade of Cuba. The Los Angeles US Hands-off Cuba Committee sponsored the event. Read more >>>Read in Spanish >>> 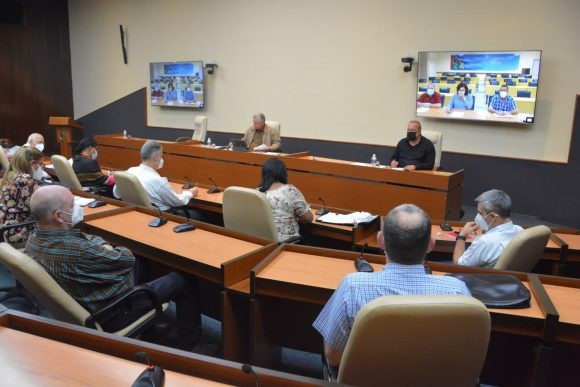 05 February 2022 Translated by Walter Lippmann for CubaNews. This Saturday’s meeting of the temporary Government Group that has been working on the prevention and control of the new coronavirus for two years was headed by the first secretary of the Central Committee of the Communist Party and President of the Republic, Miguel Díaz-Canel Bermúdez…. 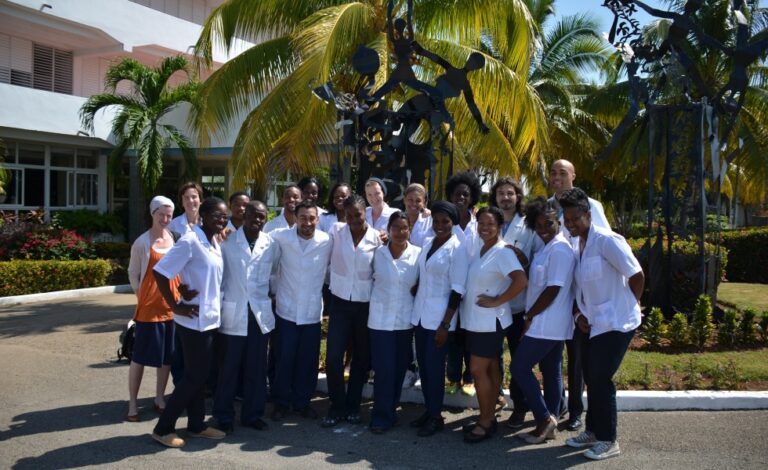 When a powerful country imposes what it claims is ‘democracy’ on other countries, it demeans the idea of democracy and crushes the possibility of any real democracy from taking root. Such a ‘democracy’ – imposed by war or regime change – is destructive to the potential of the people and to a planet facing the…